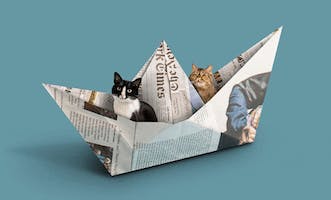 Instead of a deep dive on one particular product (our usual style), we’re recapping last week’s big/small/weird/creative/futuristic product launches, along with a few other things you may have missed across the Product Hunt ecosystem. We hope you dig it, but please share your honest feedback here.

Facebook News, a dedicated place for journalism on Facebook, just arrived. The “News Tab” became available on Friday to certain U.S. users, and will roll out more widely in the coming months. The idea is to drive revenue back to media companies — the Facebook News homepage will by curated by journalists with “editorial independence.” Tell us what you think.

Google launched a new set of apps designed to help you balance your life with technology last week. The “Digital Wellbeing” experiments debuted in the Play Store, and include apps like “Unlock Clock” to tell you how many times you unlock your smartphone per day, “Post Box” to control when (and how often) you get notifications, “Morph” to show you different apps based on the time of day, and “WeFlip” to help you unplug during IRL time with others.

Kapwing made a splash last week to introduce real-time collaboration on multimedia projects. With its new tools, creaters can edit video, animate, add music, caption images, make ads, design graphics, create memes...should we keep going? Since Kapwing came out of stealth about a year ago, it’s grown 10X (to more than 1 million users) and just raised a $11 million Series A.

An AMA about fundraising, intellectual property and mixing nostalgia with tech. An article on why now is the time to be a maker in generative media. A debate on paying for ad-free YouTube. Some honest feelings about AirPods. And a podcast about growing from zero to eight figures in 24 months.

Give us your feedback!

Last Week's Top Products
Full Page Screen Capture
Generates a full-length web page screenshot for free
Ghost 3.0
A new business model for publishing
Buy Me A Coffee 2.0
Give your audience a way to thank you 🙌
Figma Community
Publish live design files for others to learn from & remix.
Lazy
Control your environment with one easy keyboard shortcut
Show More
💌 Join 500K+ subscribers who get the best of tech every day right to their inbox
Enjoying this newsletter?
PREVIOUS NEWSLETTERS
You will die in X weeks
October 20, 2019
How to end Slack fatigue
October 13, 2019
Hey! It's that VC!
October 06, 2019
The "Nike of sleep"
September 29, 2019
NEW STORIES
How to build for culture after fundraising
Maker Stories . 8 min read
Reimagining search by Sridhar Ramaswamy
News . 6 min read
Zoom Apps for Makers
How To . 5 min read
Product Hunt, meet Hyper
Maker Stories . 5 min read
FAQTermsPrivacy & Cookies
NewsletterAdvertise
© 2021 - Product Hunt