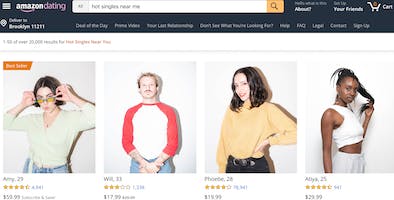 Amazon Dating is going semi-viral rn. The site’s UX is so similar to to Amazon Prime it’s scary, but instead of books and electronics and toothpaste, you can buy a date. 👀

FYI: You can’t actually purchase a person on the site, in case there’s any confusion. The site is a parody, developed by makers Ani Acopian, Suzy Shinn, Morgan Gruer and the animation studio Thinko. The idea is to poke fun at dating apps, especially in a world where big tech companies are launching dating services.

When you click through Amazon Dating, each person’s page looks like a typical product page, complete with a price and description that lists silly personality traits like “owns every Glossier product” and “famous on TikTok” and “leases a Tesla Model 3.” The makers really went all out with this internet bit — they partnered with micro-influencers on Twitter for fake ads and there’s even a “ non-ghosting agreement” (NGA). If anything, the site will make you laugh.

We’ve actually seen a ton of full-blown parody products launch lately, with MSCHF notoriously leading the charge (read all about their “Banksy of the Internet” ethos here). But the idea behind this new wave of prank products — from GAN-generated foot pics to a stocks app based on astrology — is to spark cultural commentary, especially in an era where the consequences of technology seem increasingly dire.

In the comments of the Amazon Dating post, one PH community member speculated that the product’s launch would be more appropriate on April Fool’s Day. “We like to have fun more than one day a year,” Wojtek Witkowski, one of the Makers, wrote back.

Use this to enlarge photos without losing quality. How? AI. 🤖