Over the weekend, engineers across the world took to Twitter in the name of salary transparency, sharing how much money they make annually with the hashtag #KnowYourWorth. 👀

The trend seems to have started with Slack developer Zac Sweers, who shared his education, years of professional experience, title, location, and compensation (including equity) like this: 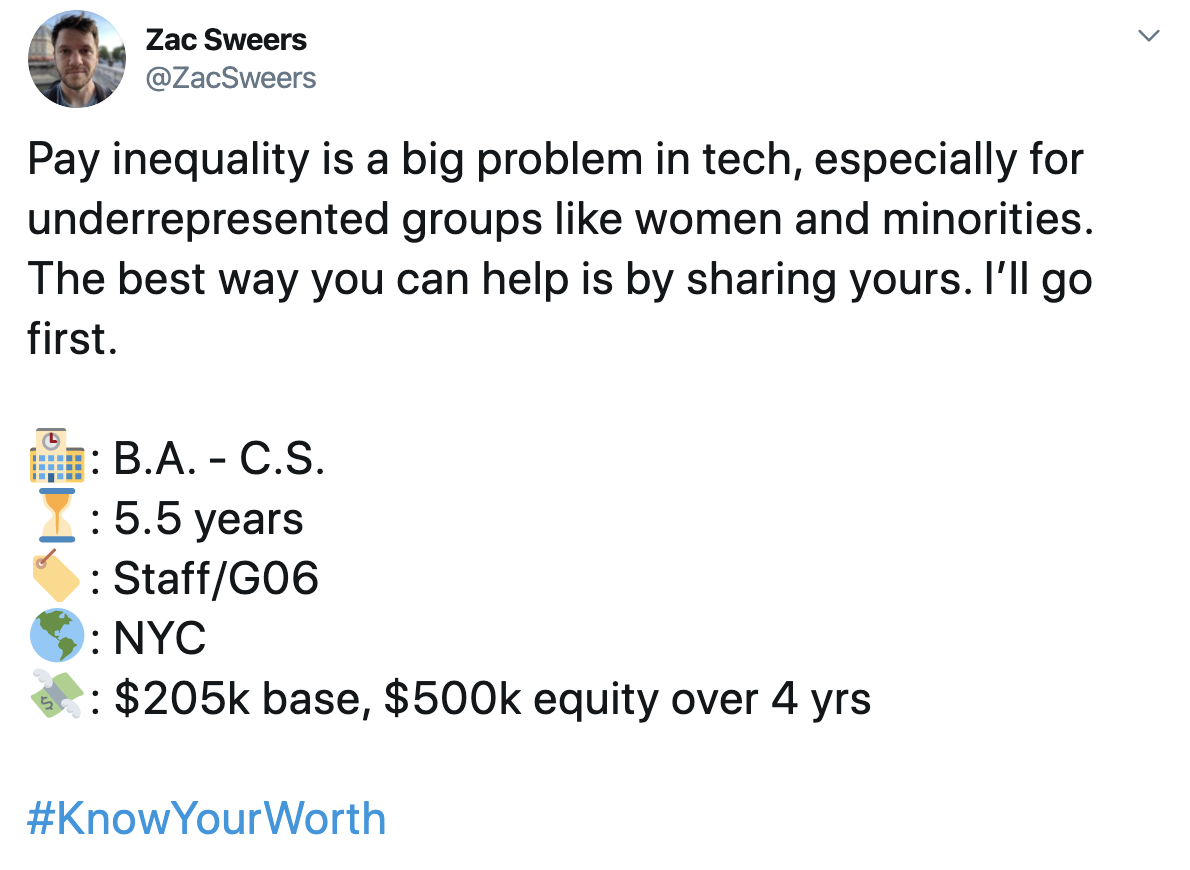 As hundreds of engineers followed suit, there were very mixed reactions. Some people felt empowered, while others were disheartened by the hefty salaries that tech workers make at big tech companies in San Francisco and New York. But for underrepresented groups, this brief Twitter movement may have worked the way Sweers intended it to.

“I’ve seen an outpouring of gratitude, particularly from women, for folks sharing,” he wrote on Twitter. “Even in cases where they have reservations about the approach of efficacy, there’s an appreciation that those sharing are trying to be an ally.”

Today, a resource called Know Your Worth launched on Product Hunt that aggregates all of the data collected from the Twitter experiment. You can search salaries by country and city, and even see how much remote engineers make.

Know Your Worth
HIGHLIGHT

Want to prototype in VR? No code required. 👈

Sponsored By
Stand out with Zendesk for Startups, a scalable customer experience solution. Get 6 months free.
Apply now
This Weekend's Top Products
Fiverr Logo Maker
The first logo maker that is powered by actual designers
Linguix
Check grammar instantly in real-time on your favorite sites
Mulch.ai
Serve relevant content to visitors, make them take action
Adriel
Get yourself a dedicated online ads performance team. We constantly give better ideas on your ad copy, image, target audience and more. For what? To boost real conversions. Our fee? From $2 a day.
Promoted
66Analytics
Self-hosted analytics with session replays, heatmaps & more.
Domais
Backorder expiring domain names
Show More
💌 Join 500K+ subscribers who get the best of tech every day right to their inbox
Enjoying this newsletter?
Previous newsletters
Facebook vs. Pinterest
February 13, 2020
You'll spend a lot less with this 💸
February 12, 2020
Finally, more foldable phones
February 11, 2020
Latest Stories
Shopify’s 100+ new updates and its bet on a new era of commerce
7 min read
Data rooms - why, when, and how?
7 min read
How I tamed panic
26 min read
The making of Product Hubs
6 min read
FAQTermsPrivacy & Cookies
NewsletterAdvertise
© 2022 - Product Hunt