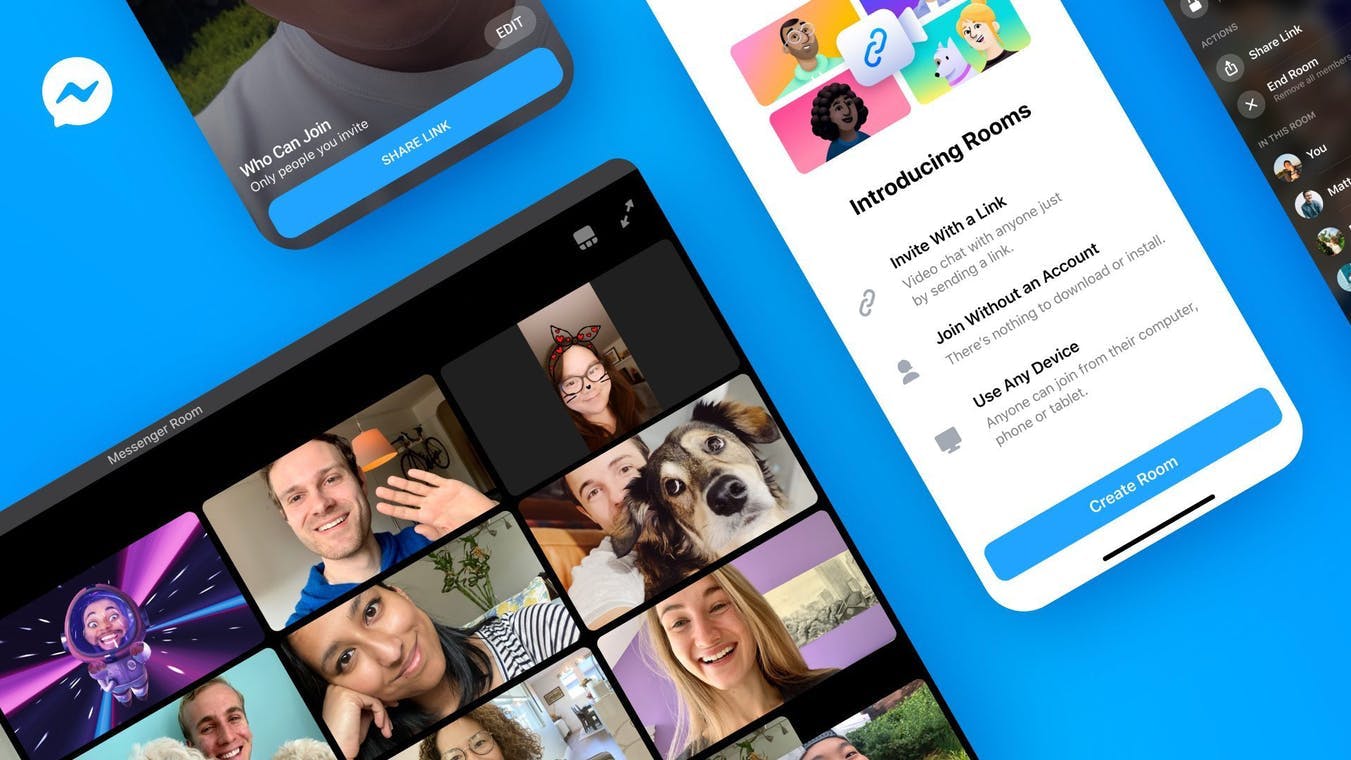 It’s no secret that Houseparty and Zoom have seen unprecedented growth because of the pandemic, and Facebook has been taking notes.

On a livestream announcement this past Friday, Facebook announced that Messenger Rooms, a new drop-in video chat room for up to 50 people, will be launching globally and rolling out over the next few weeks.

With Messenger Rooms, you can choose if you want to make the room open or keep it locked and share out links to invite people to join in directly, or post the link to groups or event pages.

The interface looks a bit like Houseparty, where you pop in and out of rooms that your friends are in a bit less formally than a Zoom call. If you have the Messenger app, you’ll also be able to use all the AR effects, plus some new AI-powered features like mood lighting and dynamic 360 degree backgrounds.

This isn’t Facebook’s first attempt at cloning Houseparty, they launched Bonfire in September 2017 and later shut it down in May 2019.

If you’re looking for a casual way to hang out with friends or coworkers while working from home, Chatparty launched recently with a different spin, casual video chats with no audio.
Check out rooms
HIGHLIGHT
Need your next side hustle idea? You can create your own brand and sell digital clothes to 140 million avatars from home.
Sponsored By

2020 has been rough. Some project it may be the worst economic year since the Great Depression.

Ten years ago, when public markets were losing trillions in value, the ultra-wealthy secured their wealth in art — one of the oldest and largest asset classes — and have outperformed the S&P by 180% since.

In fact, according to Citi, art has had the lowest correlation to developed markets of any major asset class (0.13) since 1950. And the art market is projected to balloon from $1.7 trillion to $2.6 trillion in 2026.

Now you can diversify your portfolio with paintings by the all-time greats without having to be a tech squillionaire. We’re talking about masters like: Picasso… Basquiat… Warhol… you get the picture. Masterworks makes investing in art more accessible. The Product Hunt community can use this link to skip their 25,000 waitlist.

This Weekend's Top Products
ZmURL
Build a beautiful page for your Zoom event in 2 minutes
404 Illustrations
Open-source catchy illustrations for perfect error pages
Medito
Free-forever meditation. Made for people, not for profit
Clever Ads for Slack
This bot makes it possible to track the progress of your Google Ads with metrics, graphs and tips directly on the Slack chat. It makes your life a bit easier and as we like to say, “saves you enough time to enjoy that morning coffee you love so much”
Promoted
Rezi 2.0
Create, review, optimize a professional resume for free
Project Ekalavya
Monthly book summaries that you can't forget
Show More
💌 Join 500K+ subscribers who get the best of tech every day right to their inbox
Enjoying this newsletter?
Previous newsletters
The future of home fitness: VR?
April 23, 2020
The crystal ball of e-comm trends 🔮
April 22, 2020
Cast your vote for Makers Festival
April 21, 2020
Latest Stories
Shopify’s 100+ new updates and its bet on a new era of commerce
7 min read
Data rooms - why, when, and how?
7 min read
How I tamed panic
26 min read
The making of Product Hubs
6 min read
FAQTermsPrivacy & Cookies
NewsletterAdvertise
© 2022 - Product Hunt