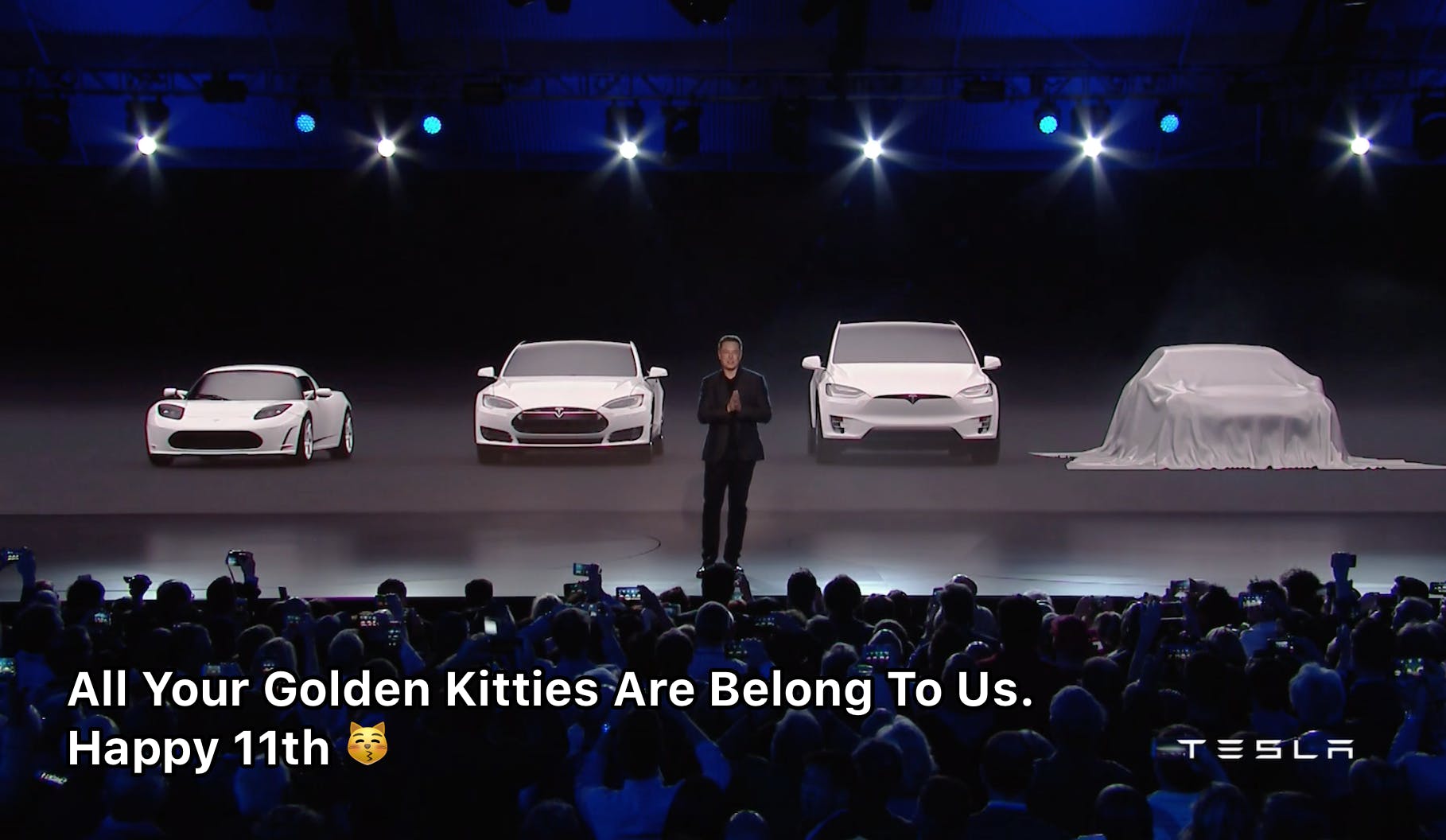 On Friday at the Model 3 handover event, Elon Musk quietly delivered on the final step of his Secret Tesla Motors Master Plan, which was published on August 2, 2006 – exactly 11 years ago today.

In one of the all-time great entrepreneurial endeavors, Musk summarized his master plan in 3 simple steps:

The Roadster, a low-volume sports car designed to appeal to the ultra wealthy, had production delays and nearly bankrupted the company in 2008 (in what Musk calls "his worst year ever"). And yet, it funded the development of what Consumer Reports called "the best car ever made."

Meanwhile, Tesla has created a worldwide supercharger network, built a Gigafactory, introduced new products like the Powerwall and Solar Roof, and acquired SolarCity (which was named in the 2006 master plan).

In 2014, when announcing that anyone can use Tesla's patents (in good faith), Musk stated the company's mission: "Tesla Motors was created to accelerate the advent of sustainable transport."

The Model S showed the world the potential of all-electric. The Model 3 is the mass-market car that Elon Musk has always wanted to create, inspiring automakers to follow Tesla's lead in the space. 11 years on, and Musk's vision of a zero emission future is coming together. ☀️⚡️

In 2016 Elon Musk became a 2x Golden Kitty Award Winner. He proudly tweeted: “Was wondering what those were” in his acceptance.

With The Boring Company and Neuralink being two of the most upvoted products of 2017 to date, Musk could become the only back to back Golden Kitty winner who has not done a LIVE Chat with the community, yet.

@ElonMusk All Your Golden Kitties Are Belong To Us. Happy 11th 😽 www.producthunt.com/newsletter/379
Tweet Elon Secret Message 😽
HIGHLIGHT
We are proud to announce that the best and 2nd best landing pages of all-time have been overtaken by the simplicity of X.
Yesterday's Top Products
Shopify’s Chip & Swipe Reader
Sell in person with Shopify’s free Chip & Swipe Reader
Foreignrap
🔥 Discover + enjoy international rap music
GraphCMS
The GraphQL CMS
Collect.chat - Chatbot for websites
An interactive chatbot widget for your website
Lingo Sketch Plugin
A design system manager for Sketch
Show More
💌 Join 500K+ subscribers who get the best of tech every day right to their inbox
Enjoying this newsletter?
Previous newsletters
STUNNING new phone with no apps 😱
August 02, 2017
Amazon, reddit, and YouTube 10 years ago 👀
July 31, 2017
How to Launch on Product Hunt Guide 😺🚀
July 30, 2017
Latest Stories
The founder of a popular Twitter tool shares his best tweets
8 min read
Announcing the Golden Kitty Awards 2021 Winners
4 min read
What it feels like when you've found product-market fit — by Lenny Rachitsky
18 min read
The CEO with an Empty Calendar
12 min read
FAQTermsPrivacy & Cookies
NewsletterAdvertise
© 2022 - Product Hunt