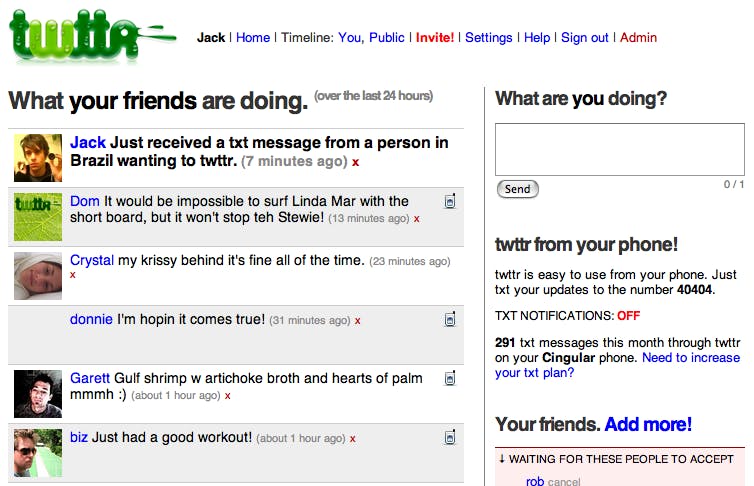 From that very first "just setting up my twittr," hundreds of billions of tweets lived together in harmony. Then... everything changed when The Algorithm attacked. Only third party developers, masters of every user demand, could stop it, but when the world needed them most, they vanished. 😮

Well, they didn't quite vanish. In August, Twitter announced sweeping changes to their API that broke most of the features in award-winning Twitter clients like Tweetbot and Tweetdeck. And while Twitter brought back the chronological timeline last month, power users still aren't pleased.

A new third party developer is here to save the world. Zach Hamed just launched Macaw, a new Twitter client that surfaces the top-liked tweets from your network. Macaw focuses on tweets and users that you *should* follow, rather than tweets and users you already follow:

Zach isn't alone trying to fix Twitter. Earlier this year, Sindre Sorhus launched Refined Twitter, which strips out all ads and algorithmic tweets. Mastodon, Peepeth, Afari, and Leeroy are rebuilding a decentralized Twitter on the blockchain. Oh, and this fancy Emoji Tweeter lets 👏 you 👏 type 👏 like 👏 this.
TRY Macaw
HIGHLIGHT
Books for Founders: A collection of books curated by founders and investors like Jessica Livingston, Drew Houston, and Chris Sacca. 📚
Yesterday's Top Products
Luna Display
Hardware that turns the iPad into a wireless second display
Macaw for Twitter
A free iOS app with the top-liked tweets from your network
June.ai
A communication hub that replaces email
Masterworks
Want to own part of a $2m Warhol or a $6m Monet? The art investment platform Masterworks.io let's you buy & trade shares in the world's most valuable paintings from just $20 a share. Check it out.
Promoted
Zeroqode 2.0
Everything you need to build apps without code.
Ekster Smart Wallet 3.0
The instant access smart wallet
Show More
💌 Join 500K+ subscribers who get the best of tech every day right to their inbox
Enjoying this newsletter?
Previous newsletters
Finally, a tool to enable Dark Mode for every website 🌚
October 10, 2018
Everything Google launched yesterday 📱📸
October 09, 2018
Inside the founding of Reddit 📚
October 08, 2018
Latest Stories
The CEO with an Empty Calendar
12 min read
What it feels like when you've found product-market fit — by Lenny Rachitsky
18 min read
The unicorn startup with zero revenue?
7 min read
“90% of the game is not giving up”
10 min read
FAQTermsPrivacy & Cookies
NewsletterAdvertise
© 2022 - Product Hunt