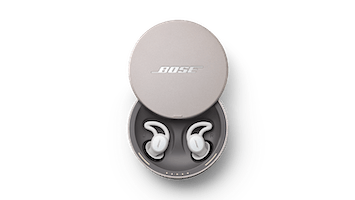 According to Bose in response to this question, Bose noise-masking Sleepbuds "achieve ultra-low radiation exposure because the Sleepbuds do not stream audio or other content throughout the night. Instead, the product plays back files that are stored locally." Additionally, "the sleepbuds use a class III Bluetooth radio which has the lowest transmit power among all the Bluetooth classes. During an entire night, sleepbuds emit a fraction of what traditional Bluetooth headsets emit during a single phone call."

So, it seems that while Sleepbuds do emit some amount of radiation, it's a trivial amount compared to what the average person is exposed to on a daily basis.

Better sleep, all night, every night