The start of 2021 brought an unexpected rainstorm of Clubhouse competitors.

Spaces was one of those drops but was just one of a slew of product updates recently announced by Twitter. The two most prominent reasons for this uptick of features? The creator renaissance and the realization that money has been waiting for Twitter in the creator economy.

Not long after its initial introduction of Spaces in December, Twitter acquired Revue (newsletter platform similar to Substack) and Breaker (social podcasting) followed by its launch of the Tip Jar. When you put all the pieces together, you can see that Twitter is working on creating a mega-space for creators. Few could have guessed Twitter’s first foray into being an actual content generator would be on the topic of weather.

Twitter has teamed up with Eric Holthaus, "Rebel Nerd of Meteorology,” (and a total of 18 local meteorologist contributors) to launch Tomorrow a local weather news service that uses all of the creator products Twitter has added. Twitter's VP of Product, Mike Park, told Axios:

“It’s the largest collective of writers and experts we’ve launched with.”

Look out for long-form content, live audio sessions, ticketed virtual events, and Q&A where members will be able to ask questions to climate experts during weather-driven breaking news. 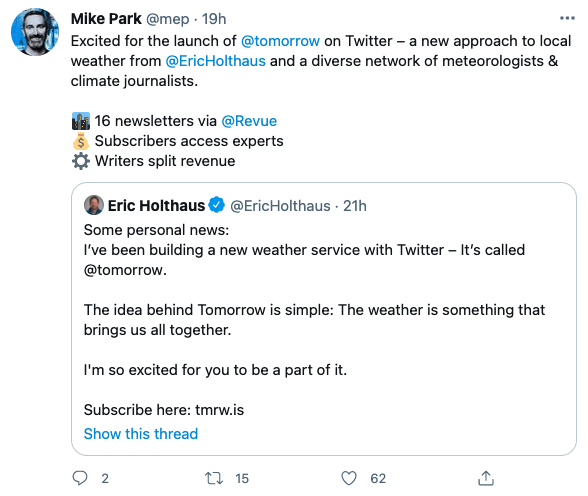 This is just the start of the company’s new model to invest in local collectives where audiences fund local writers and creators with low overhead. The model will help Twitter’s bottom line, which is great for the company since ad revenue has been stagnant. Park explained to Axios that “it will soon get to a place where video monetization is one among several revenue models on Twitter.”

In retrospect, weather seems like an excellent focus for Twitter due to the urgency of climate change and the platform’s role as a breaking news distributor.

We’re wondering what type of creators Twitter will tap into next. Ideas?
On to Tomorrow
HIGHLIGHT
Hello, loomSDK!

Loom launched its SDK into public beta today to make it easier for makers to add screen and cam recordings to its own products.

Loom partnered with Trello, Miro, Hugo, and more for this launch — we’re can’t wait to see what those integrations look like, along with many more to come from the Product Hunt community.

In this lab, you’ll have the opportunity to:

Join them on July 15 to learn how to deploy modern machine learning models on Snowflake and AWS.

Yesterday's Top Products
Mobile Palette Generator
Generate color palettes with a click of the mouse
Designing UX for SaaS
Free ebook to level up the User Experience of your SaaS
Venus Design System
Design system with 2000+ components & 250+ styles for Figma
Restream Studio
Join thousands of entrepreneurs & startups who have added live streaming to their marketing strategy. With Restream Studio, you have the easiest live streaming tool right in your browser. Add branding, invite guests, and more. Get started for free.
Promoted
LoopMessage
Mass personalized messaging in popular messengers
Zospace UI Kit
Create cosmically awesome Tailwind templates in minutes
FindCreators.io
Find creators based on any keyword, for free.
Spot
The virtual hub for your organization
Guess the Growth
Can you match famous startups and their growth tactics?
Coherence X4
Turn websites into Chrome-powered apps on your Mac
Fastbee
The all-in-one price tracker for all major US outlets
Show More
💌 Join 500K+ subscribers who get the best of tech every day right to their inbox
Enjoying this newsletter?
Previous newsletters
Makers Festival is here!
May 31, 2021
$85M for your pitch deck
May 30, 2021
Make social fun again
May 27, 2021
Latest Stories
How startups can survive the creator economy winter
15 min read
7 lessons from 7 years of game development
19 min read
Krisp.ai: The noisefighting superhero
10 min read
Your brain-altering screen addiction explained. With ancient memes.
6 min read
FAQTermsPrivacy & Cookies
NewsletterAdvertise
© 2022 - Product Hunt