💡 Get ideas from solving your problems

🛠Build with the tools you already know

💰 Monetize by asking users for money

Embed
Featured 3 years ago
discussion
Would you recommend this product?
109 Reviews4.0/5
Guillem CarbonellUbik.bz

It's a gret summary of what you need to bootstrap an idea, but it lacked of sincerity since its inception.

We've been waiting and, in spite the end result is visually attractive, I feel slightly scammed. Early adopters payed a lot for an ebook which production lasted too long and is not printed. In the meanwhile, Pieter talked about how he was investing in cryptocurrency —with our investment on his book?

Besides, the community helped him write the book for free.

Moreover, It doesn't have bibliography nor sources from his biz school studies; it seems he withholds some tricks from himself (or his blog). Also, there is some media out there where he says almost the same things for free.

It's a great exercise of personal branding, but lacks of technical depth, following the rule that if you failed it is because you did not work enough. It would improve with more strategic principles rather than mere tactics.

If you'd like to get in touch with the feeling of successful bootstrapping, read "Things a Little Bird Told Me" by Twitter's founder Biz Stone (paperback, 20$). On how to structure a new business, "Business Model Generation: A Handbook for Visionaries, Game Changers, and Challengers" by Alexander Osterwalder (paperback 19$). On great design, I recommend you read "Da cosa nasce cosa" by Bruno Munari.

We payed 30$ for an ebook, extended production time while harvesting pre-orders

Share3y
levelsio
Maker
Serial maker of Nomad List, and more
Hi Guillem, sorry to hear this. > Moreover, It doesn't have bibliography nor sources from his biz school studies; it seems he withholds some tricks from himself (or his blog). Also, there is some media out there where he says almost the same things for free. I don't know what I've withheld. My business school studied were 2007 - 2012, that was way before I was in startups. A lot of the business school theory is interesting but not practical for startups. Therefore, I've focused on specific and actionable information that people can use, fast. > It's a great exercise of personal branding, but lacks of technical depth, following the rule that if you failed it is because you did not work enough. It would improve with more strategic principles rather than mere tactics. I think a lot business books are too strategic but not actionable. The readers leaves feeling they learnt a lot, but don't have much to apply. This book gives you direct ideas on what to do, when. Again, actionable. I hope this clears it up a bit, why I wrote it in this way! Still, thanks for letting me know.
Share3y
Okii EliFounder
super
Share3y
Nat CollinsChief Redshifter @Veloloop
Thank you for mentioning that the book is targeted for digital-product startups, as opposed to startups in general. Software and web developers often forget that there are other types of startups out there.
Share3y
Hidden comment
levelsio
Maker
Serial maker of Nomad List, and more
👋 Hi Product Hunters! When I was reading Hacker News in 2013, I remember seeing @patio11's posts on building web apps (like Appointment Reminder) by himself, without funding. Back then, there weren't many others doing anything like that. Back then, you were either big and VC-funded or you were a freelancer working for them. Ever since Product Hunt launched 2014, there's been a rise of indie startups. It's never been more possible to build something on the internet, by yourself, without funding, charge money for it, and pay your bills. I'm the living proof of that. Just as music has indie bands, the startup world now has indie startups. This book is everything I learnt in the last few years about building indie startups. In the hope that it makes them more popular. Get ideas from problems you have in your life, build solutions for them, validate them by launching and seeing if you get users, monetize by asking your users for money, grow by building with your users, automate your business and if you like at some point exit and sell it! 🤡 How I wrote this book I felt on a very meta level, I wanted to write this book with the theory described in this book. Before even writing a single line on it I announced this book and opened it up for pre-orders: 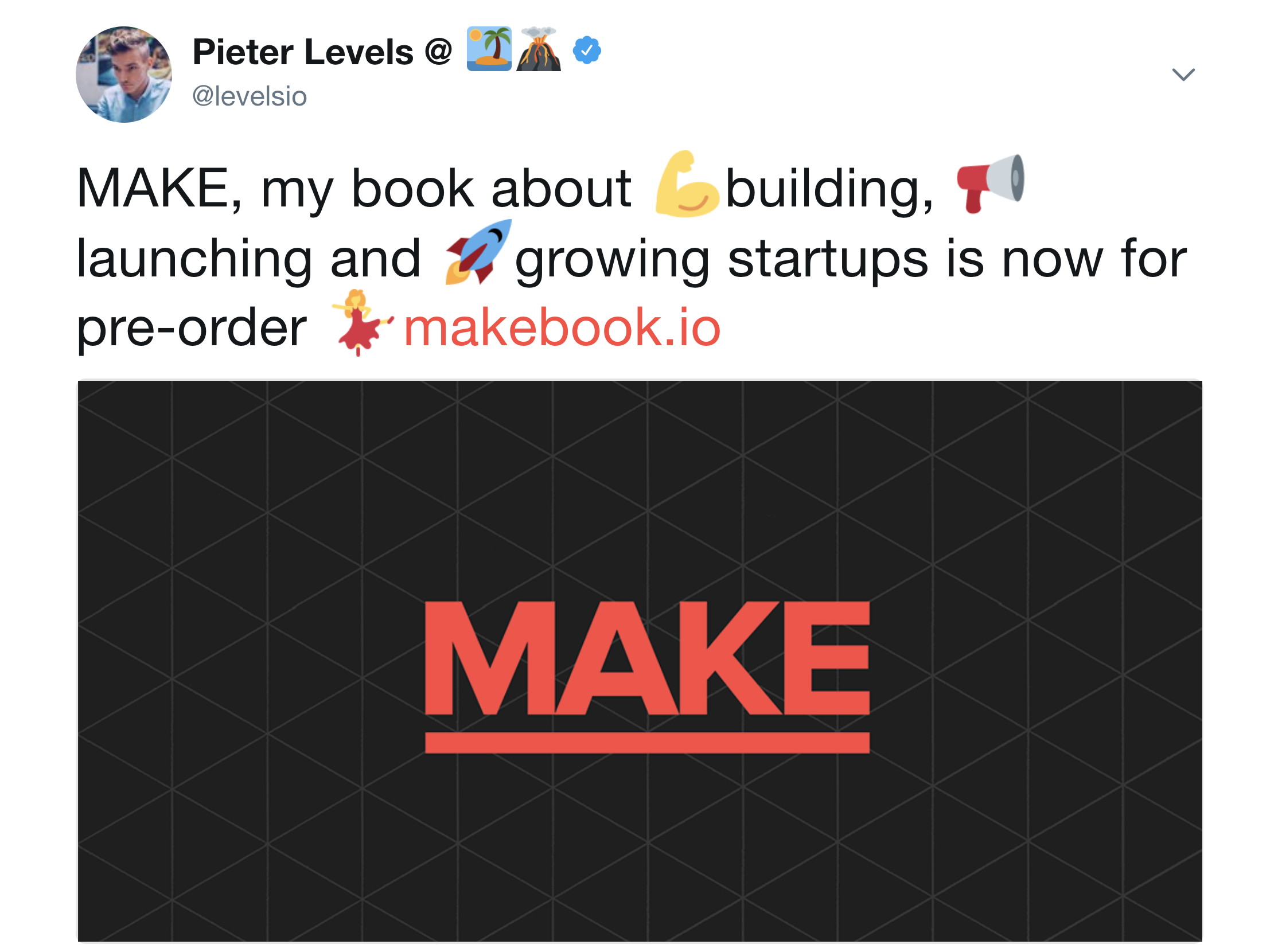 The landing page was literally a Typeform telling that I wanted to write a book, but it didn't exist yet, and asking for $30 to support it. 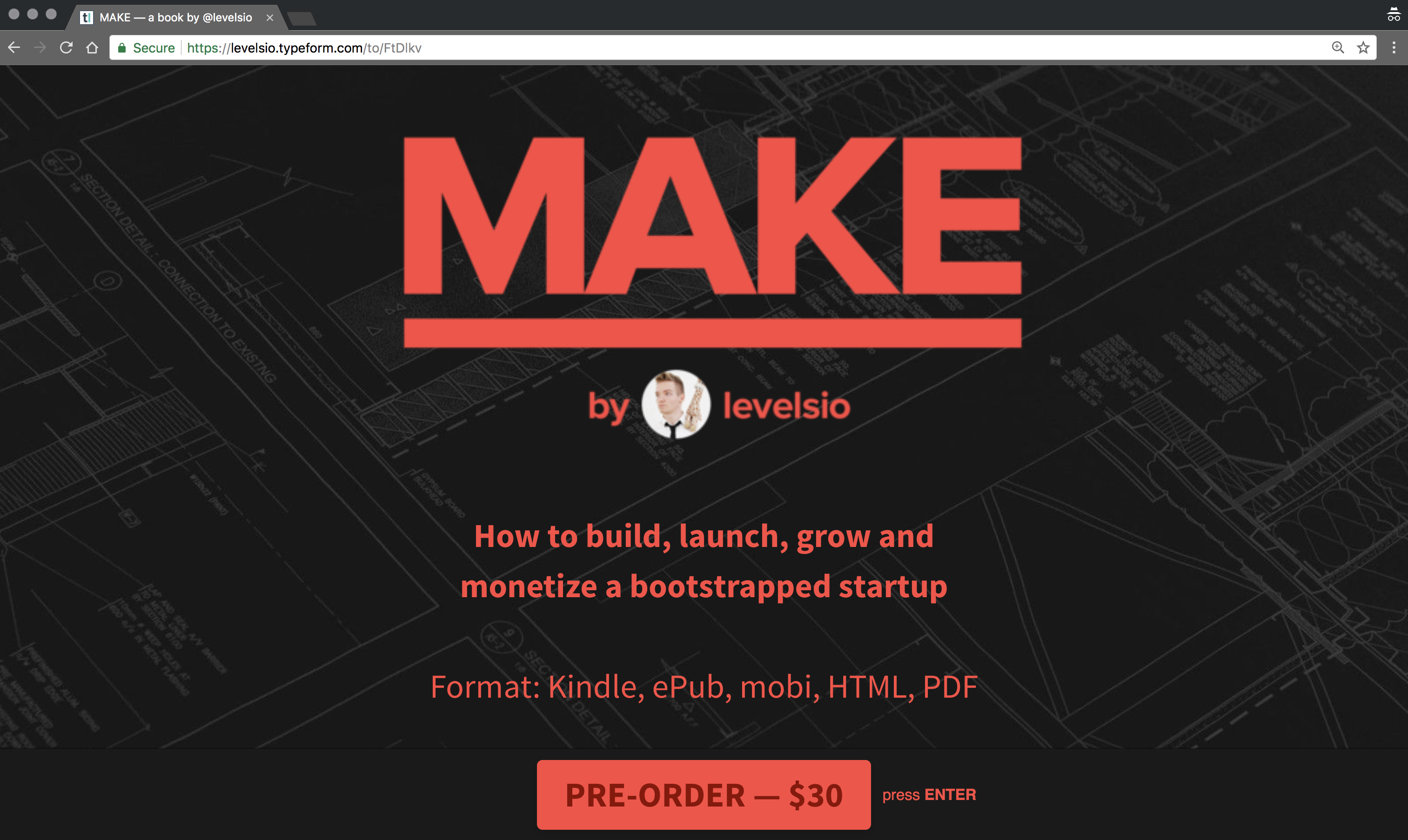 The only thing people received after paying $30 immediately was an empty Workflowy list where they could write what the book should be about specifically. That gave me immediate feedback from customers what they wanted me to make. Just like a startup. 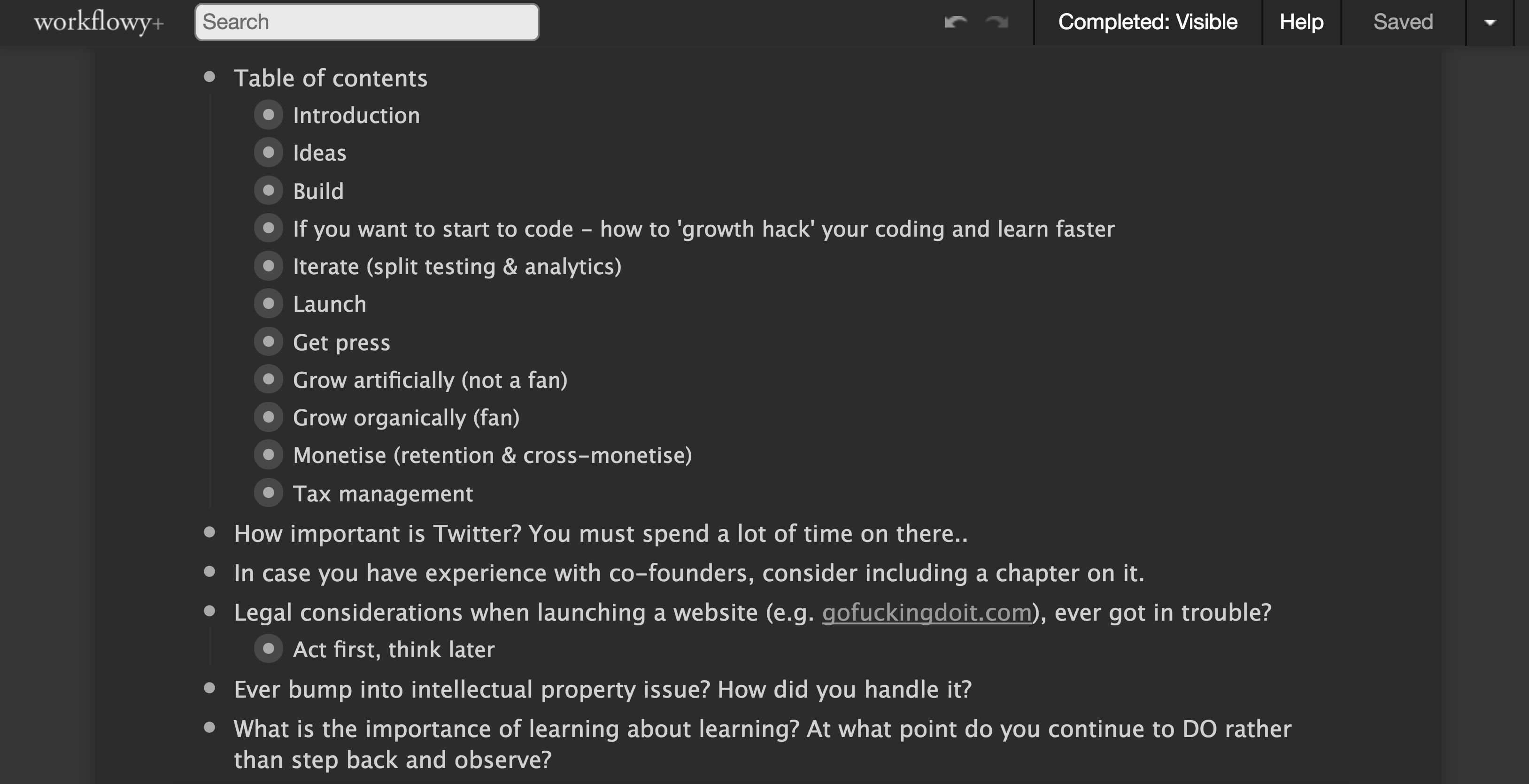 Thousands of people pre-ordered the book (quickly netting $50,000+ in revenue at $30 per pre-order) and there was thousands of items in the Workflowy list to write about. I went through it regularly and tried to re-order it to find patterns. I found I could divide up all questions people had in the different stages of startups. Ideas, building, launching, growing and monetizing. Everyone was at a different stage and needed different questions answered. I then started writing the first chapter. I wanted to do this by "building in public" too. Or in this case, writing in public. I made a Google Docs text document and started writing. 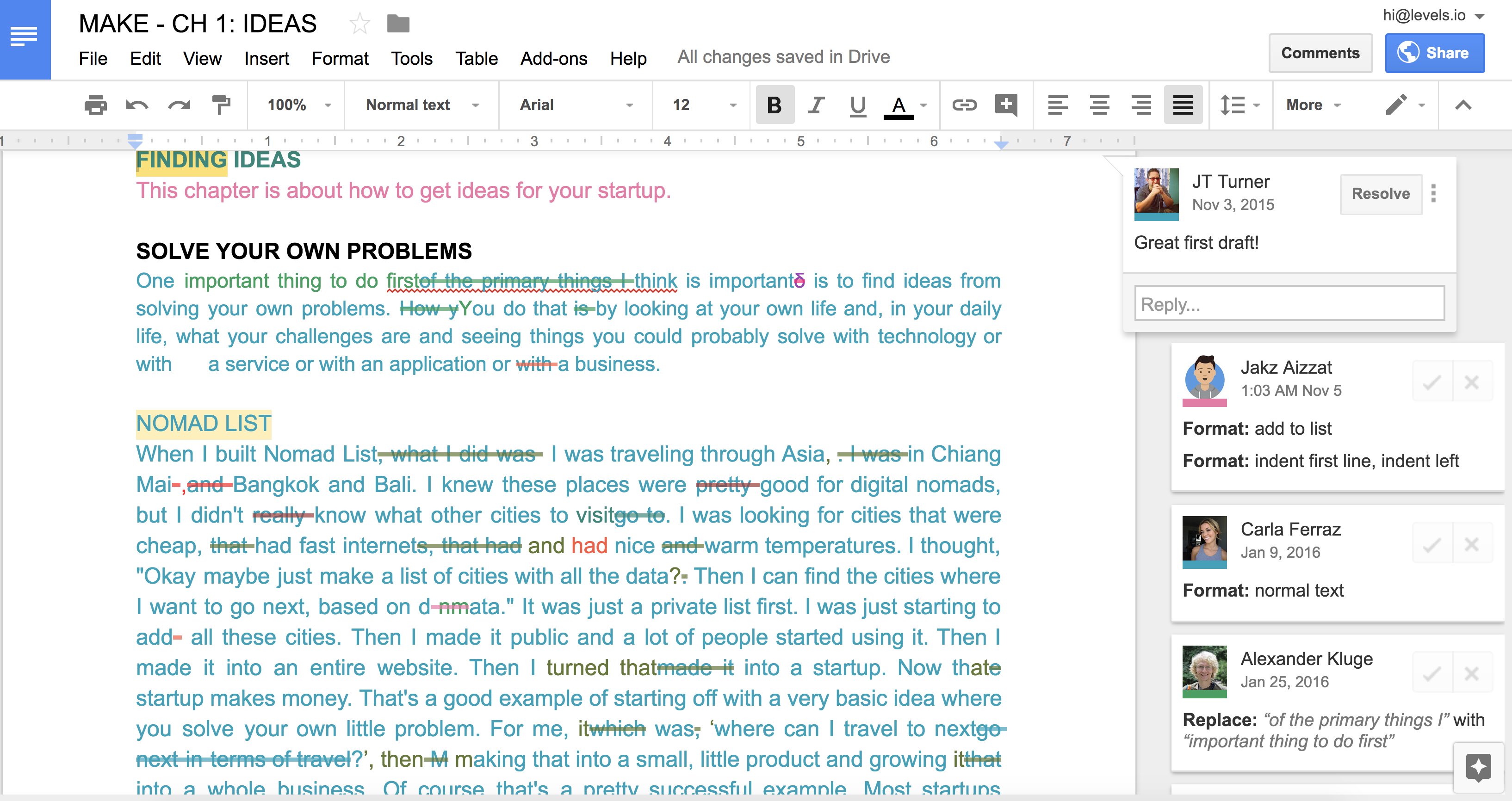 But not before I started a live stream on Twitch of the writing process of course. I wanted to live stream most of the chapters. It helped me because, as you may know if you've ever written a book or thesis, the procrastination of writing can become incredible. 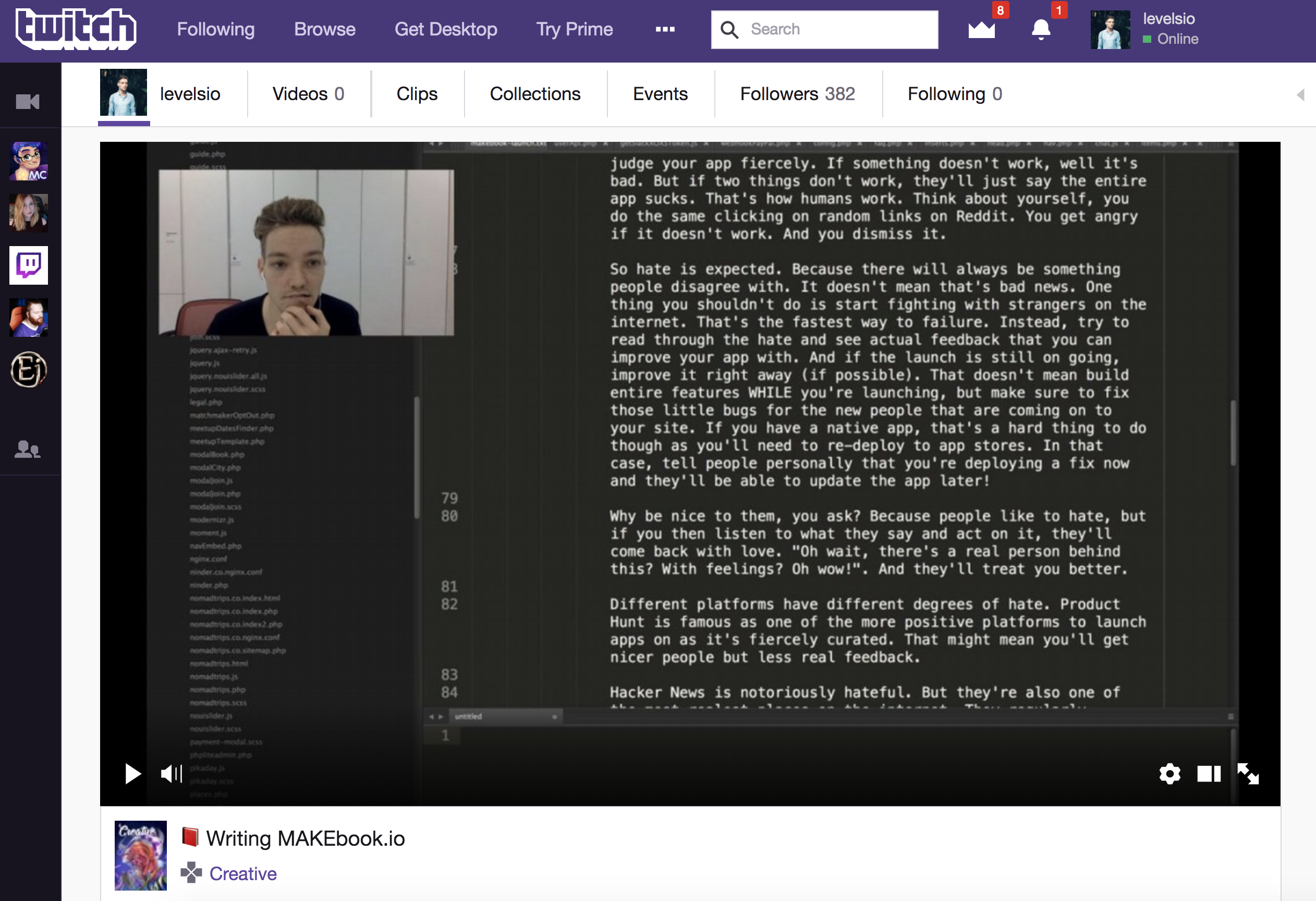 Every time I finished the draft of a chapter I sent it out to all the pre-order customers. And they could review it as a Google Doc again.

Only the final process of writing this book was done by myself. Collecting all the content, cleaning it up, rewriting it and making editorial decisions on what should be in it. But 90% of the process was out in the open. And that's exactly what this book is about: launch early and build with your users. 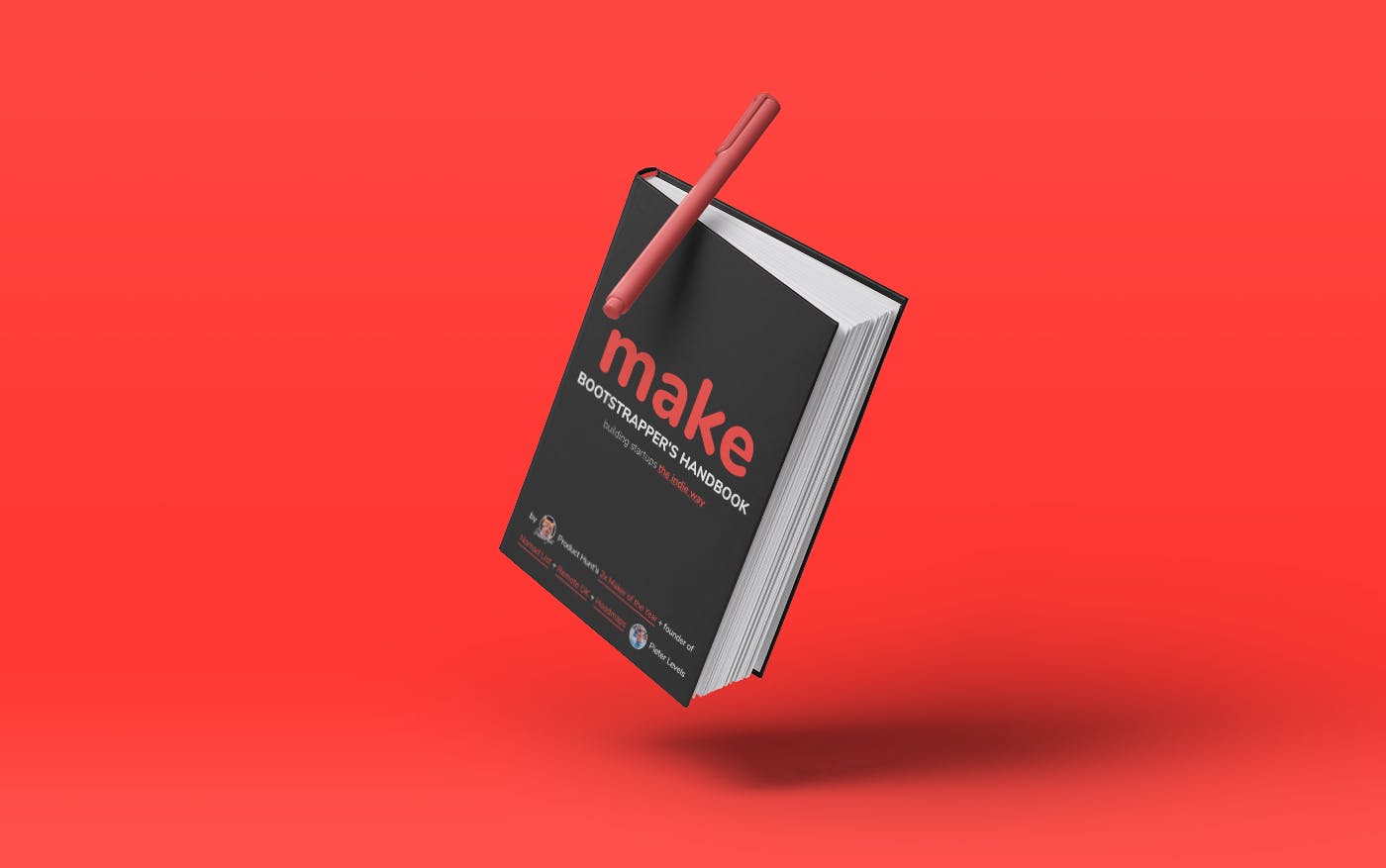 📺Video Here's a presentation I did last month about some of what's in the book: 🙂I hope you enjoy reading it and it'll help some of you get into building your own apps, web apps, products and startups!
Share3y
Craig BarberFounder of Logobly
@levelsio Great work Pieter, would love to see this as a hard copy too. Would feel pretty good to have it in your hands as an author I reckon.
Share3y
Ben LangSerial hunter 🧞‍♂️
@levelsio Hope we see more authors publish this way, so awesome!
Share3y
Ahmad Awais ⚡Google Dev Expert / Node.js CommComm
@patio11 @levelsio Awesome stuff, especially the way you wrote it. Mad props! 💯
Share3y
Marc KöhlbruggeFounder of BetaList

Many if not most business books are written by authors, rather than actual entrepreneurs. This makes sense considering entrepreneurs are busy running their business :)

Despite Pieter being a true entrepreneur he still found the time somehow to write this book.

I would recommend any (wannabe) maker to just go out and build stuff rather than read books. I bet Pieter would say the same. However, if you feel stuck or need some motivation, then this is the book for you. Buy it. Read it. And get back to shipping.

You still actually need to go and do the work. Reading is not enough.

This is the second time that the book has been featured on ProductHunt. The first time was back in 2015, when I pre-ordered. Yet to receive anything from Pieter indicating that the book is actually finished.

Ordered in 2015, have not received my copy yet