Can a streaming platform be built without code?

Today’s Daily Digest was crafted by us and sponsored by our friends at Webflow.

You can take years to build a product or do it in a weekend. A maker can be a child prodigy or someone who can’t write a line of code. Anyone can be a maker, and that’s true now more than ever.

Few movements have made good on their promise to democratize something better than the no-code movement has democratized entrepreneurship. Webflow has a hand in that with its visual canvas that lets anyone build a site, with down-to-the-pixel customizations, all without code. The startup has enjoyed a gratifying year — it closed a $140M Series B, announced oft-requested features like Logic and Memberships, and reached over 3M users.

Now it has launched a new streaming platform to tell the stories of those users.

“We're curating stories that will inspire, and also producing original series that share stories about the impact no-code is having in the world,” wrote maker Mischa Vaughn from Webflow’s content team.

Webflow TV will feature original productions as well as a highly curated collection of inspiring stories while partnering with content creators like The Futur and Charlie Marie. Its first original docuseries is called Generation No-Code and looks at how no-code development is closing the gap between idea and impact and empowering historically “would-be” entrepreneurs with the tools to pursue their dreams.

“Going through all these stock [image] sites, I just couldn’t find diverse illustrations. I just didn’t feel like I was being represented. Who’s going to do this or release this — why not me?” shares maker John Saunders in the trailer.

In true no-code fashion, the team created Webflow TV with five tools in just one month, inspired by a project from the company’s internal hackathon where the team asked “Can a streaming platform be built with Webflow?” You can read about the tools and their build on the blog.

We’re looking forward to watching the series and have started checking out content on the platform. It’s all free, so you can start watching now too.

A database management tool that's fun to use?

Arctype just launched its supercharged SQL client for developers and teams. "We want to do what Figma did to improve on Photoshop and make Arctype much more accessible to developers through a clean design, collaboration, and a UI that's easy to learn," maker Justin de Guzman shared.

Archtype is part of the Hyper inaugural cohort of startups. Maker Everett Berry shared more about Arctype's journey to finding product-market fit today on our blog.

To Arctype
Maker Stories
How I turned being stressed out on Zoom into my next startup
UserVoice founder Richard White's newest product was born out of Zoom fatigue and a realization that the best insights from his calls didn't stick. Here's how he turned his Zoom stress into Fathom.
Read more (9min read)
Sponsored By

No-code development rings the bell – more and more people are turning to it.

Processica Agency provides accelerated implementation of digital projects with no-code/low-code tools. They select no-code platforms based on the client's requests, budget requirements, and project specifications. Rapid results with no loss of quality, no long-term commitments, a customer portal for communication with the team, and a weekly subscription are just a few benefits of partnering with them.

Check it out
Yesterday's Top Products

Shortcut
Project management without all the management.
Promoted

Fable
The web-based motion design platform
Resumey.Pro 2.0
Create a resume that helps you stand out
Designify Pro
Bulk-edit any number of product photos in seconds 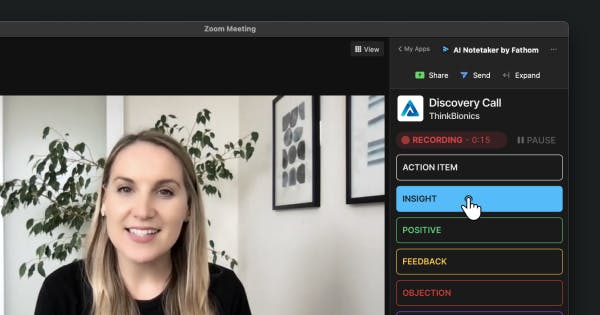 👨‍💻 UserVoice founder Richard White launched a new product called Fathom to replace note-taking before & after your Zoom calls. Read more how he went from idea to product here.

☕ Buy me a coffee, but with crypto.

🍳 Can you really sear a fish without oil? AirTaste uses a new and unique approach to heat your food. See how it works.

🎁What do you get the one who has everything? How about a gift card with Bitcoin?

🗒️ This Tailwind cheat sheet gives you every class name from Tailwind CSS on a single page.

📖 Currently reading: "The Cold Start Problem" by Andrew Chen which explores the network strategies that tech’s most successful companies uses to scale from just a handful of users.

To Fathom
💌 Join 500K+ subscribers who get the best of tech every day right to their inbox
Enjoying this newsletter?
Previous newsletters
The price IS right
December 06, 2021
Robots for makers
December 05, 2021
Search on, and on...
December 02, 2021
Latest Stories
5 apps to help with your 2023 resolutions
3 min read
From Golden Kitty to $10M raised
6 min read