The 2-week-old app with 1M downloads 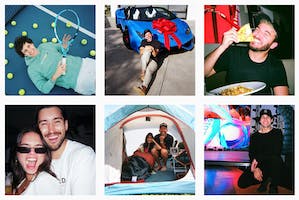 David Dobrik has 11 million Instagram followers. He has even more followers on YouTube, where over 15 million people subscribe to his channel. All of that is excluding the three million followers he has on his Instagram account dedicated exclusively to photos taken on a disposable camera. You get it — David has a lot of followers.

That’s why it’s not that surprising that David’s new camera app, David’s Disposable, has already reportedly surpassed over one million downloads. FWIW, it launched in late December. 📸

The app landed briefly at the top of the list of Apple’s more popular free apps in the App Store, sitting above Disney+ and Instagram itself (it’s no longer listed at the top of that list). According to The Verge, folks on TikTok have also taken to recommending the app.

The lo-fi, '90s look of disposable cameras has made a big comeback on Instagram as of late, a trend fueled by nostalgia and the need for imperfection on an app the rewards perfection. So far, that look has been achieved through apps like Huji Cam (which was downloaded over 22 million times as of 2018), 1888, Gudak, or an actual disposable camera if you’re old school.

David’s Disposable seems similar to a lot of these apps — it turns your phone screen in a Fujifilm-style disposable camera. When you snap a photo with app, you have to wait until 9 a.m. the next day to look at the photos, simulating the experience of an actual disposable camera. You can also order the photos as prints directly from the app. 👀

David’s Disposable is free to download, but a $1 subscription fee will get rid of ads within the app.

Get the app
HIGHLIGHT

Yesterday's Top Products
GrowSurf 2.0
Create a custom refer-a-friend program for your site
My Startup Name
Free + simple framework to name your next project or startup
Libpixel
One image, any size, every device.
Podcorn
<p>Podcorn is a marketplace that connects brands and podcasts for native sponsorships. Kick off your podcast strategy this year and take the pain out of finding and sponsoring on-demand audio shows on us with a <strong>$50</strong> credit using the code <strong>PH50</strong>. </p>
Promoted
Jepto
Digital Marketing Intelligence and Automation
Nocodery
The nocode job board
Show More
💌 Join 500K+ subscribers who get the best of tech every day right to their inbox
Enjoying this newsletter?
PREVIOUS NEWSLETTERS
100,000 teams use this
January 08, 2020
Review: A year of deepfake launches
January 07, 2020
Cannabis drama at CES
January 06, 2020
Acquired by Snap 👻
January 05, 2020
NEW STORIES
How to build for culture after fundraising
Maker Stories . 8 min read
Reimagining search by Sridhar Ramaswamy
News . 6 min read
Zoom Apps for Makers
How To . 5 min read
Product Hunt, meet Hyper
Maker Stories . 5 min read
FAQTermsPrivacy & Cookies
NewsletterAdvertise
© 2021 - Product Hunt